Summing my experience with Haida HR in one word – Incredible!

Hailing from a small town in Australia, Haida opened doors of new possibilities for me. I was initially skeptical about what China would have in store for me? Always wanting to explore the culture, I invested my trust in Haida HR to help accomplish my dream of teaching in a foreign land.
I was appointed as an English teacher in China. The employees at Haida were very supportive and encouraging. They are accustomed to our foreign culture as the company successfully hires many foreign teachers annually. 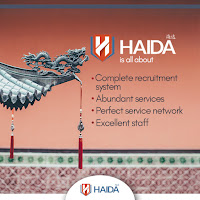 Completely unaware of the new-land, Haida HR helped me at every step of my transition, from accommodation to making me comfortable, and at home (even when I was away from mine). The company helped me through the documentation, paperwork, and every other information I sought. Being in a culturally different country comes with its own challenges and opportunities. With Haida, I can proudly profess that challenges were rather mitigated, and all I saw was opportunities ahead of me.
Getting familiar with Chinese tradition and adapting a teaching style according to their culture required extra efforts. But once you firm your grip, it will turn out to be a pleasant exchange of cultures between you, and your students.
China is rich in its heritage. Coming to the country was an incredible decision I made, which I could have never witnessed staying back in Perth. Haida helped me get acquainted with people so much so that now I think of them as my own! I have been working with the organization for 2 years, and I recommend it to all the fellow foreign teachers who are willing to work in China.

Teaching in China: My experience with Haida HR

Hello everyone! I am a PT teacher from Adelaide, Australia, and I’m sharing my experience of Haida HR with you all. 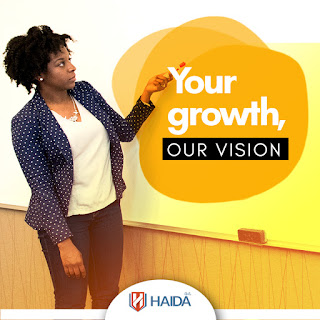 My job in China with Haida HR is my 1st job abroad. I had never even thought of leaving my country. Being a teacher was always my goal because it feels great to give something back. I was already working with a school when I came to know about Haida.
I joined Haida HR just over 6 months ago and I have no bad things to say about them. With my employer in China, during the initial days, it was a little hard to get my point across and I think this is due to the cultural differences which are completely understandable.
However, the best thing is about Haida is that most of their Chinese employees have studied or at least lived abroad which makes a huge difference. The staff listens to you and they have a great understanding of how western society works.
Haida HR help you every step of the way from getting proper accommodation to the little things such as setting up a bank account and phone. Any minor issues that I have had, Haida has done its best in helping me overcome these problems. This has been nothing short of a weight lifted from my shoulders because being in a culturally different country can sometimes be challenging.
Life with Haida has been nothing short of a joyride. I was posted in Hangzhou – a city with a rich history, culture, and tradition. Hangzhou has a lot to offer. It’s an amalgamation of awesome bars and sightseeing spots. Chinese food here is nothing like the takeouts we used to have back in Adelaide – it’s more nutritious, authentic and yum.


I am really thankful for Haida being so helpful to me as well as for other employees. I would definitely recommend this opportunity to teachers back at home to experience this themselves.
at November 26, 2018 No comments:

How working in China with Haida HR changed my life

As a Math teacher recruited by Haida Interact International, I would really love to share my experience and thoughts with all the teachers out there who don't know much about Haida HR and are skeptical about the prospect of leaving their homeland to work in China.

I joined this big, happy family in May this year. Just like anyone else might have done, I also went through a fair share of reviews and testimonials online before taking the plunge. However, after working for all these months with Haida HR, I feel myself to be in the position of writing a testimonial about the company.
Haida HR has been in every way much more than a normal recruitment company. It has been a family to me. Through Haida, I have gone through a life-changing experience – working in a lovely country like China, and getting acquainted with an amazing culture!
Haida offers you a wholesome work experience that’s enriching and fun in equal parts. Never had I ever dreamt of working so distantly in a completely different culture. But the support and care I received from Haida made everything easier for me and my fellow teachers. So if you ask me, I would highly recommend working with Haida HR.

How Haida HR introduced me to a new world

I am a Physical Education teacher from Brisbane. Two of my friends were working with Haida HR when they told me about the firm. I came to know from them, that the company arranges for every single thing including lodgings and paperwork. The company also offered them a good salary.
Working in a far-off land like China was an interesting prospect for me, and listening to my friends’ experience there with Haida made me want it even more. I made up my mind and decided to dig deeper into the company. The reviews I read online helped me take the big leap – getting myself registered with Haida HR, and I was hired within a month or so.
My experience with Haida HR turned out to be just what my friends had told me. The company is very supportive of foreign teachers in China. The officials are kind and encouraging. People at Haida HR helped me a lot in adjusting to the Chinese way of living, which seemed to be a humungous task at first because I didn’t even know how to speak or understand the Chinese language.


Nevertheless, I am loving it out here. China is an amazing country to work in, and I feel lucky to have got Haida HR as my recruitment agency because these people are so reliable. I have never had to worry about anything during my last 6 months in China because Haida takes care of everything.
at November 02, 2018 No comments:

My experience of working with Haida HR has been amazing. I was teaching English at a school in Hangzhou, China. Each class had about 40 students, eager to learn. Together, we worked in harmony, as a true team learning and sharing knowledge with Chinese students. I didn’t just teach those children English, we also used to explore various countries, cultures and their celebrations.

While my teaching work was limited to three days a week, I spent the rest of my weekdays in China taking in the sights and learning about Chinese culture. There was a lot to learn from – their language, their food, their festivals, and related rituals. Thankfully, Haida HR helped me at every step.
The schoolkids in China enjoy learning. We had an enjoyable learning experience together. The fellow Chinese teachers even allowed kids from their classes to come to my classroom during the classes. It was wonderful. This is an experience I will always remember.


It had taken me a lot of courage to take this plunge – working out of my city, my country. But it took even more courage for me to leave China after spending such a great time teaching there. Thank you for the incredible experience, Haida HR!
at September 30, 2018 No comments:

My personal experience with Haida HR 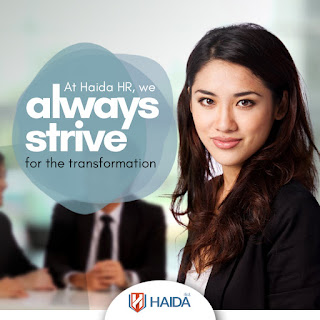 I am a Math teacher from Vancouver. I came to know about Haida HR through a friend who was already working with them. He told me all about how Haida HR arranged everything for him – be it his Visa or even his lodgings in China. Moreover, he was getting a pretty good salary there.
After hearing it all from my friend I was fascinated by the prospect of working out of the states. I decided to dig deeper and so I sifted through tons of reviews about Haida HR online. Most of these were positive, so I decided to take the big leap.
I decided to shift my base to China through Haida HR because I found the idea to be just awesome! I mean, who wouldn’t like to explore a new country along with earning some big money? I got hired by Haida within a month of applying for job.
Just like my friend had told me, Haida HR turned out to be a reliable recruitment agency. The firm arranged for everything I might need for working in China like Visa, work permits, lodgings and even food. I didn’t have to worry about anything even for a single moment.
Working with Haida HR has been the best thing that has happened to me. Teaching in China is a unique experience altogether. Haida HR has given me a chance to get an insight into the Chinese culture, apart from the obviously great job opportunity. I have been working with them from last 3 years now.

An Art Teacher in Hagzhou 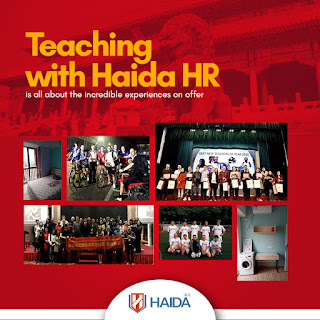 I found Haida HR after my graduation in London. I always wanted to explore China, especially Hangzhou. Which I have heard has the best panoramic spots to enjoy. After 3 months of my graduation, I registered with Haida HR through their website. It was a bit complicated and made m anxious, I won’t deny, but I was helped by the Haida executive. Amy, all the way. I was able to take up the job of an arts and crafts teacher at a leading Hangzhou school. It’s quite an interesting job as my students are excited bunch. They do create a ruckus at times and it’s difficult for me to control them, but at the end of the day, I am the guy in their life who makes a difference, who releases their inner artist.
As for my personal life in Haida, it’s been okay. Haven’t been able to find a girlfriend yet because I am somewhat ugly (lol), but there are lots of fishes in the sea. Everyone is nice at Haida, especially the community of teachers and other educationists. Before you join Haida, I suggest everyone to get a feel of China first. I had friends who complained about the Chinese life even when they were getting so much from Haida.

Summing my experience with Haida HR in one word – Incredible!

Hailing from a small town in Australia, Haida opened doors of new possibilities for me. I was initially skeptical about what China would ha...